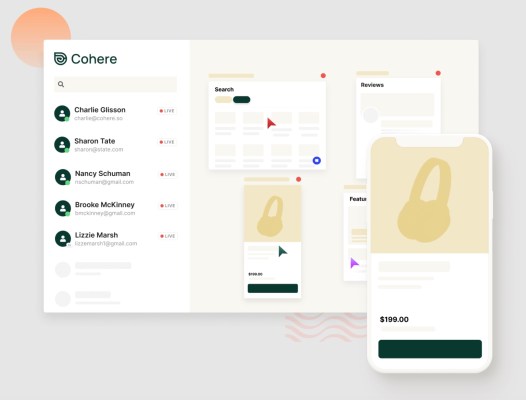 Existing remote desktop solutions such as LogMeIn and TeamViewer can be complicated to set up and use, and may seem outdated. A new startup called Join, now backed by $ 3.1 million in seed funding, aims to improve the remote desktop and screen sharing experience. With Cohere’s technology, businesses can help customers in seconds by taking instant control of their screen without any downloads or configuration by the customer.

This ease of use has already earned the startup more than 50 paying customers for its product, including TechCrunch Disrupt 2020 winner Canix, CopyAI, Ramp and others. She also signed her first corporate client with Podium.

The three co-founders of Cohere, Yunyu Lin, Jason wang and Rahul Sengottuvelu, first met while attending Duke University. Lin then left to work for Company card start-up ramp, but the rest graduated during the pandemic.

The idea for Cohere actually emerged during the pandemic, during a hackathon focused on remote working. The team won the event and decided to hand their project over to Y Combinator for further development.

Essentially, Cohere is designed to make it easier for teams, whether they’re small founders or large companies, to solve their customers’ problems. Instead of requiring a software download or a complicated installation process, customers can simply click a button on a website to allow remote control of their screen. This can save time, as the support person on the other end of the phone does not need to ask a million questions on the screen the customer is on or seeing, or tell her where to click – she can just take over.

â€œIt lets you see what people see just like that, without any configuration,â€ says Sengottuvelu. â€œYou can just show them, like you’re sitting next to them. “

But what makes Cohere different is that it’s not a complete remote desktop solution where the person on the other end takes control of someone’s computer – the service doesn’t. only transmits the content of the individual web page that the person is currently viewing. The app developer, that is, can only see what a user is doing on their own website. They cannot switch tabs or minimize the browser to dig deeper into the user’s PC.

â€œWe don’t work at the pixel level like normal screen sharing does, where they take a picture of your screen 60 times per second and try to send it over the wire,â€ says Lin.

The startup’s technology itself is based on capturing the state of the webpage – an image of the DOM, so to speak, for those who understand the terminology. It then operates things like Observers of the mutation and WebSockets to quickly see changes to web pages in real time. Cohere has also spent time making sure it works with a range of web technologies and frameworks including React, Iframe, Canvas, Vue, Angular, and others. Ultimately, he wants to expand support to more platforms and technologies.

â€œWe capture the content of the page,â€ Lin says. “This enables us to selectively filter out sensitive information such as credit card information, passwords or social security numbers – any personally identifiable information,” he adds.

The remote viewer also cannot take control until the user agrees, then the user can start them anytime by clicking an “X” button at the top of the screen.

In addition to these security checks, Cohere is SOC 2 Type 1, GDPR and CCPA compliant.

Currently, Cohere works on both desktop and mobile browsers, including Chrome, Firefox, Edge, and Safari. And it’s designed to integrate with a company’s existing tools, such as Zendesk, Slack, Salesforce, and Intercom, with more to come.

While the product competes to some extent with older remote desktop applications, its new Cohere Replay feature allows businesses to go back in time to view their customer sessions retroactively.

Since the product is limited to web applications and is not a complete remote desktop solution, it tends to be primarily used for tasks like customer support and user onboarding. Start-ups have also used it to take tours of their first customers and learn about how customers are using the product in real time.

Cohere first launched about seven months ago, during its Y Combinator bundle.

New York-based Cohere, currently made up of only the three co-founders, will use the additional funds to hire in sales, engineering and products. It will also dedicate capital to building the company’s sales process and expand its integrations and use cases.

Early Stage is the premier â€œhow-toâ€ event for start-up entrepreneurs and investors. You’ll hear for yourself how some of the most successful Founders and VCs build their businesses, raise funds, and manage their portfolios. We’ll cover all aspects of building a business: fundraising, recruiting, sales, product-market fit, public relations, marketing, and branding. Each session also incorporates audience participation – there is ample time for audience questions and discussions. Use the code â€œTCARTICLE at checkout to get 20% off tickets right here.