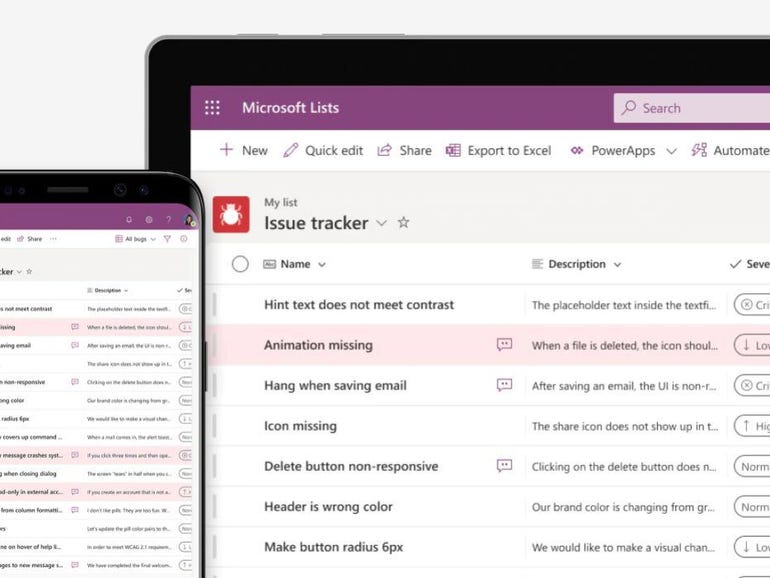 Microsoft officials had “one more thing” surprise for web-app users on the opening day of its virtual Ignite Conference 2020 September 22. During a demonstration of Microsoft Lists, Microsoft Vice President Jeff Teper demonstrated “Project Nucleus,” a new technology that Microsoft plans to integrate into the Lists information-tracking app later this year and likely to other applications as well.

Project Nucleus is a synchronization plumbing that Microsoft eventually plans to add to some, if not all, of its Microsoft 365 OneDrive and SharePoint web apps and SharePoint portals. Nucleus enables data availability regardless of internet speed or size of data stored by an application. As the maintainers said during a Microsoft Lists session, “no synchronous round-tripping is needed for filtering, sorting, or scrolling”, and large lists will work without limitation with the addition of Nucleus technology. Any changes made to offline content will be automatically synced once the internet connection is restored.

Microsoft officials in another Ignite session described the Nucleus project as going beyond Progressive Web Apps (PWAs) for quickly accessing and modifying large and complex datasets.

Project Nucleus allows caching of web content on local machines in the name of improving performance. It’s not just about caching data; it also syncs changes to the local cache by leveraging some of the underlying technologies used by Microsoft in OneDrive sync. Project Nucleus uses SQL Lite as metadata store and for light processing I mean. It will also expose an application programming interface (API) that a web application can use.

As well: Microsoft 365 (formerly Office 365) vs G Suite: Which is better for business?

I was wondering if Project Nucleus had something to do with Microsoft’s other favorite plumbing technology: Fluid Framework. But other than both of these technologies connecting to the Microsoft Graph API, I think the answer is no.

In the Microsoft 365 roadmap, offline access for Microsoft Lists is featured as a December 2020 deliverable, so Nucleus could soon make its public debut.

Microsoft’s official statement on the Nucleus project, provided to me by a spokesperson when I asked for more information:

“As Jeff (Teper) shared in his keynote, Project Nucleus is the latest of our upcoming investments in the SharePoint platform – powering experiences across Microsoft 365 and custom solutions. Project Nucleus will initially manifest in Microsoft listings and will power the next generation of our web applications and portals.It will use intelligent synchronization with a database to maintain a cache on the client that our web applications use to deliver a performance leap forward.