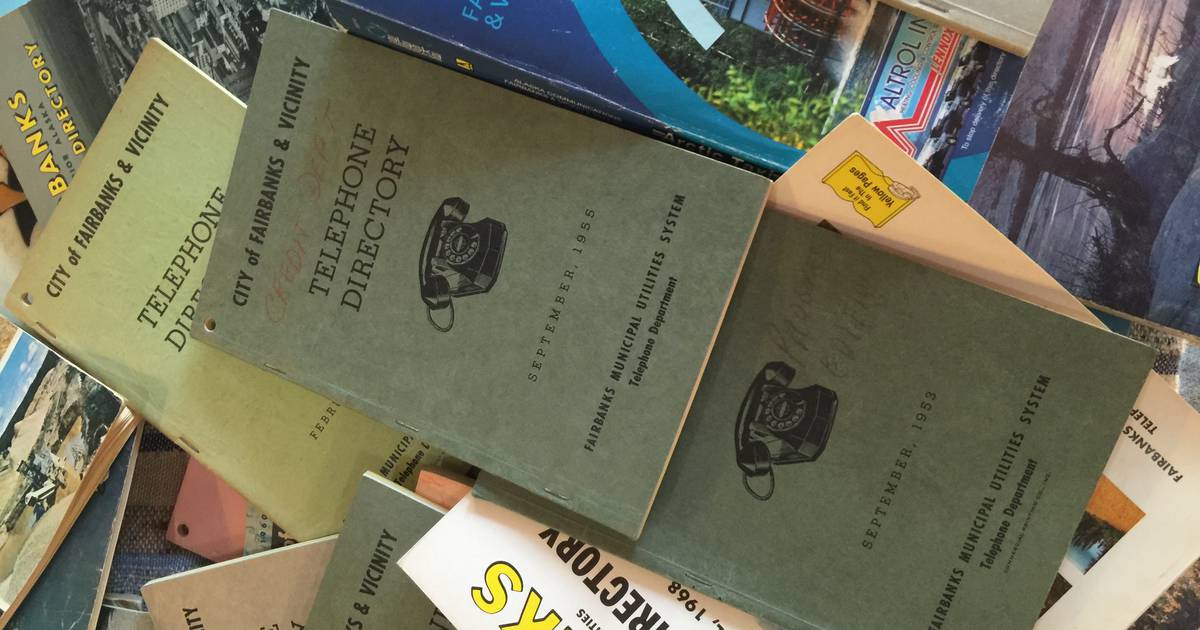 Phone companies say legislature freed them from having to publish directories

The official local phone book, a throwback to the days when phones were any color as long as it was black, quickly disappears from the scene.

“In the age of the cellphone, white page directories have become increasingly incomplete, outdated, and of extremely limited utility,” Alaska Communications Systems recently told the Alaska Regulatory Commission, the former regulator of telephone directories. “Additionally, the market has produced a variety of readily available third-party directory options, including online and print directories.”

Once an indispensable link with the outside world, the telephone directory has lost its position as the telephone search engine par excellence. Cell phones, smart or not, and the ever-expanding network of unlisted mobile numbers not cataloged by state regulatory authority and broadband options have changed consumer habits. A 2014 national survey showed that 44% of households depended entirely on mobile phones, along with a majority of children and young people.

The distribution of the official phone book, once a noteworthy annual event that often produced a news story or two, got lost amid alternatives that didn’t require leafing through pages printed on cheap paper. “Let your fingers walk” today and you may never get there.

In 2011, ACS asked RCA to allow it to stop sending telephone directories to all customers in Fairbanks, Anchorage, Kenai and Juneau. A year later, the RCA freed “local exchange carriers” from the long-standing requirement that they must provide universal distribution. It became an easier decision not only because of electronic alternatives, but also because of the explosion of competing off-brand telephone directories, some with outdated listings, which had begun to pile up in the aisles and on the front steps.

Under the revised rule, official telephone company directories went only to those who asked for them. A lot of people never asked. In Anchorage, only 5,000 of 120,000 ACS customers requested copies of the white pages, the company said.

Soon, customers who request it will have to look elsewhere for phone numbers or dial for directory assistance. That’s because the Alaska Legislature unanimously approved a bill in 2014 that removed the regulatory commission’s power to require local carriers to publish telephone directories.

In an 11-minute hearing in 2013 and a four-minute hearing in 2014, lawmakers heard repeated assurances other lawmakers that under the legislation, customers who wanted a phone book would still have the option of calling the local phone company and getting one. Rep. Kurt Olson, R-Kenai and other promoted House Bill 169 as the solution to telephone directory clutter and the way to bring regulation “into the 21st century”.

“These directories would still be available if a person opted in by contacting their service provider,” Olson told State House. “When they have a new service connected, they get a postcard that they can fill out and ask for once and they get it until they ask they don’t get it.” In his sponsorship statement, Olson said he wanted to end “onerous requirements to distribute increasingly incomplete and outdated directories.”

“There’s always the option; it just doesn’t require every landline in Alaska to require the availability of a phone book,” Micciche said. Telephone companies supported the bill, but lawmakers did not ask if they planned to continue printing directories.

The bill, signed by former Governor Sean Parnell, states that “the commission may not regulate the production and distribution of telephone directories.” The telephone companies say this means the commission cannot compel them to produce and distribute the white pages.

In response to the new law, CAR staff proposed draft regulations that would require telephone companies to post electronic directories on their websites and update them at least every six months. In legislative hearings, lawmakers discussed unwanted phone books, not online directories.

Telephone companies reacted to the proposed rule as if they were receiving an unwanted telemarketing call – they said RCA had no authority to say anything about directories. The ACS said CAR staff “fundamentally misinterpret” the text of the new law, “which prohibits the RCA from regulating directories in any format, not just printed books. »

“The law does not distinguish between paper directories and electronic directories, it applies to both”, GCI said in a May 15 filing. The cost to carriers of creating and updating electronic lists would outweigh the “limited benefit” to consumers. ACS and GCI said customers can call and pay for directory assistance if they need a number or get it for free at whitepages.com and other sites.

GCI said it does not keep the numbers in a way that “can be quickly and easily placed on its website” and that it believes the same is true for other companies. He said if the RCA wants to make directories available, it should create its own website and ask carriers to submit the information.

“It would be a relatively simple task for the commission itself to assemble the spreadsheets into a database that could be viewed and searched by consumers on the commission’s website,” GCI said.

A group of rural telephone companies that includes towns from Adak to the North Slope said the bill’s history in Juneau demonstrates “that customers do not want the continued supply of directories” and that companies have the possibility of offering telephone directories at their discretion.

The ACS said RCA’s draft staff rules use the term “directory listings” instead of directories, “but that can’t stop them from violating the statute.”

“‘Directories’ are nothing more than collections of ‘directory listings’ and the terms are effectively synonymous,” ACS said. If the legislature had intended the new law to apply only to printed telephone directories, it would have written the law that way, she said.

The draft regulations also provided that companies would have to provide a directory in an “alternative medium” at the request of a customer. Again, the companies say it’s not legal under the new law, which “expressly stripped the commission of its power to regulate directories,” ACS said.

The commission “should remove all references to directories from its existing regulations and close this case without further action,” ACS said on May 15. The directory rules were a legacy from the days when telephone company monopolies existed, the company said.

In 1978, the Alaska Public Utilities Commission declared telephone directories to be an important part of telephone service. Yellow Pages. which are primarily advertising media, have not been regulated since 1986, which is the main reason why there are many competing versions.

Directories of Pharmaceuticals and Devices and Clinical Trials

How To Share Directories On Your Local Network From Ubuntu Desktop 22.04