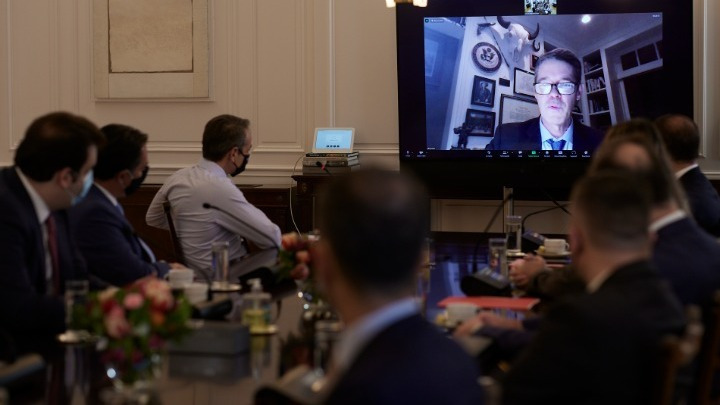 Prime Minister Kyriakos Mitsotakis spoke to Amazon executives on Friday about the global company’s very large planned investment in Greece, involving infrastructure expansion of Amazon Web Services local areas outside the United States.
The discussion took place online with AWS Vice President for Global Public Policy Michael Punke, who congratulated the Prime Minister on the great strides Greece has made in a very short period of time.
Mitsotakis pointed out that Greece is evolving rapidly and becoming a hub for high-tech investments. He said it was very encouraging that major global players are choosing Greece as the location for establishing a permanent presence. He said the investment was “one more vote of confidence in the prospects for the Greek economy” and spoke of the great efforts being made to digitize the Greek state.
â€œWe have a ‘cloud first’ policy and we intend to make Greece a data storage center. The government is fully aligned to support this vision and I am very happy that you respond to it and that you will significantly increase your presence in Greece, â€he said.
Mitsotakis said he had worked in investments before getting involved in politics and said he was happy that “with a little delay what I thought would be possible in Greece with regard to the technology sector and of innovation, which contributes a significant percentage of our GDP, happens in practice.
He noted that many people choose to work in Greece because of Covid, adding that Greece greatly facilitates these digital nomads by issuing visas allowing them to work anywhere.
â€œWe have a perfectly designed immunization program that is completely digital. We are systematically increasing online services for businesses and citizens. If you ask the average Greek what is the most successful thing in this government, they will tell you that it is digital transformation, â€Mitsotakis said.
According to a government announcement, Greece will be the site of one of 11 AWS local zones the company plans to establish in Europe, confirming the country’s position as a regional technology hub, where large companies are making investments. strategic infrastructure that will support the fourth industrial revolution and the economy of the future.
Local areas reduce application latency and provide greater computing power, digital storage, databases and other services with infrastructure located near major urban, industrial and technological centers.
Punke said Greece was chosen partly because of the government’s meticulous work in the preparatory process, but also because of the change seen in the Greek economy from the previous decade. He praised the Prime Minister for his leading role in Greece’s progress and digitization efforts.
Digital Governance Minister Kyriakos Pierrakakis said this was the result of a whole series of changes and policy initiatives taken in recent years, including the decision to prioritize cloud computing. He said a quarter of funding from the Greece Stimulus Fund will go to digital services and the cloud.
The Minister of Development and Investments Adonis Georgiadis, who was also present, sent the message that “we are here to help in every case and to solve all the problems concerning an investment in order to accelerate it and improve its economic prospects” .
The meeting was also attended by State Ministers Giorgos Gerapetritis and Akis Skertsos, AWS Public Policy Officer for Central and Eastern Europe, Franco Spicciariello, Company Public Policy Officer for Greece and Cyprus Marina Stavrakantonaki, Head of Commercial Sector for Greece and Cyprus Athanasios Patsakas and Public Head of Sector for Greece and Cyprus Vasilis Kotitsas.

Thanks for reading Hellenic News of America

Payday loans are a problem. Can a public bank be part of the solution?