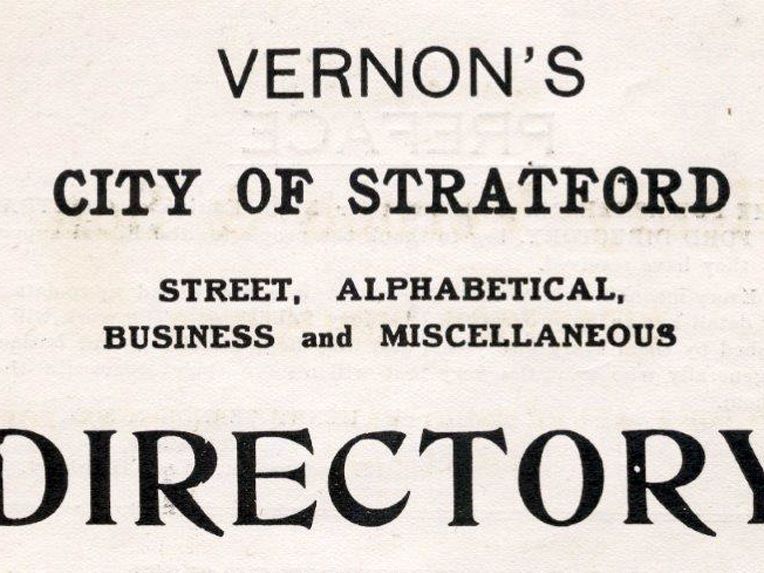 In 1924 John Richea was living at 242 Huron St. in Stratford and working at the Stratford Beacon Herald as a linotype operator. Her two-door neighbor at 323 Huron Street was Mrs. Mary Kinsman, the widow of William J. Kinsman. Down the street at 286 Huron St., corner of Huron and Avondale, their neighbor was Herber JL Eedy, the owner of Eedy’s Bakery at 27 Market Place, where he sold breads, cakes and other baked goods assorted.

How can so much information be uncovered, especially when 1924 was not a census year? Vernon city directories of course! Directories can help fill gaps between censuses and help track family members or local businesses on an annual basis.

Municipal directories were a popular form of publication from the mid-1870s until the mid-2010s. Each directory typically contained both an alphabetical listing of all residents by surname and a listing of residents by street. It also included a business index, as well as various advertisements for local businesses on each page.

The first two directories of the town of Stratford – 1876 and 1880-1881 – were compiled and published by William W. Evans. The third, was published in 1896 by Union Publishing Company. Beginning in 1898, directories were published by Vernon City Directories.

The Vernon directories were started by Henry Vernon (1850-1919), born in Kent, England. Around 1874, he immigrated to Hamilton, Ontario, and began working for William Henry Irwin. William Irwin (1832-1900), originally from Ireland, published directories for about thirty years in many cities, including Toronto, Hamilton and Montreal. Vernon began to take over the business around 1897 and established Henry Vernon & Son publishing.

Vernon ran the business until his death in 1919. His son, Alfred Vernon (1882-1941), then took over as heir to the business. Alfred later became president of the Canadian division of the Association of North American Directory Publishers for a time while continuing to manage Vernon’s directories. In 1933 Vernon moved the Hamilton office from the Lister Block to 29-31 Rebecca St. The printer of directories also moved from the Hamilton Typesetting Company to the Griffin & Richmond Company Limited.

Over the next few decades, Vernon’s Directories became a subsidiary of many other companies while retaining its Vernon brand name. Some of the owners include: the Richmond Brothers (Bert and Ken), owners of approx. 1941 to 1955; the Seldon family, including Don Seldon, David Seldon and Stuart Seldon from 1955 to 2009; and finally, the last owners from 2009 to 2016, Wally and Beth Cooper.

The Stratford-Perth Archives are proud to announce that their historical directories for the town of Stratford are now accessible to all researchers via their website. To access it, you can go to the archives home page at www.stratfordpertharchives.on.ca, then click on the “Research Tools and Digitized Collections” tab or the “Digital Repositories of Stratford”. Once the page loads, scroll down and open the first tab under the digitized collections section titled City of Stratford Directories. You will find all the directories sorted by year. Some of the directories can be searched by keyword, please click Ctrl + F on your keyboard to bring up the search bar in the document once it has opened in a new browser window. Please note that this is not a complete collection of Vernon directories for the town of Stratford, as the archives have only digitized and downloaded all issues previously available on microfiche up to 1997.

Another important addition is ‘coming soon’ to the digital collections section of the Stratford-Perth Archives website. Families of Perth County is a project that aims to locate, preserve and share photographs and associated documents relating to the lives of several families in Perth County. This project is the work of Robert McEwan, who is a descendant of these families. Robert spent countless hours scanning and identifying photographs and researching family links. This collection includes 20 families: Ballantyne, Barton, Blacklock, Fulcher, Hearn, Hemsley, Holmes, Irvine, Johnston, McEwan, Moses, Moore, Murphy, Pearn, Rolston, Schwindt, Smart, Stewart, Struthers and White.

The collection consists of approximately 4,000 photographs, many of which were taken in Perth County in locations such as Listowel, Mitchell, Milverton, Monkton, Stratford and St. Marys by professional and amateur photographers. In addition to photographs, several families also kept important documents, including wills, notes, funeral cards, postcards, newspaper clippings and letters, which are also part of this collection. In some cases, copies of birth, death and marriage certificates, and various census pages have been added for context. Each family is organized into a folder with two sections – the first is a family tree and the second contains a table that lists family photographs and archival documents that are also included in the collection. Please note that this project is a work in progress and as such only six of the 20 families are ready to be published online. New families will be added over time.

The Stratford-Perth Archives are open for in-person research by appointment. Phone and email service is also an option. Please contact us to schedule appointments to use the collections or to meet with the archivist to discuss possible donations of archival material. We can be reached at 519-271-0531 ext. 259 or [email protected]

6 Of The Best Lead Generation Directories For Lawyers

Say no to phone books and yes to mobile-friendly websites

Qmed+ is a game changer for provider directories